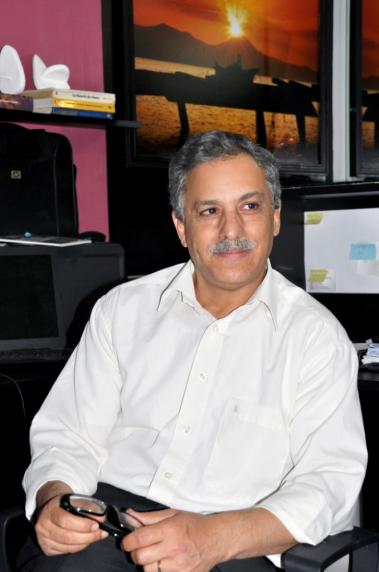 Faculty of Economic Sciences and Management,

Strange attractors are they three-dimensional objects? Rather mathematical behaviors ! These are the displays of deterministic dynamics and cannot be summarized by a given frequency.

Explicitly oriented to the simplest exhibition of these dynamics, with very teensy mathematical tools, the purpose of this web-page aims to oversimplify to the young students the Chaos Theory.

In this e-page, we present our own research which led to new classes of 3D & 4D Strange Attractors.

We present also our own research on the Tunisian Telecommunication Market.

- Economics under the Covid-19 Threat:

The current pandemic could expand oppotunistic ploys between firms ! We present below a paper on the ability of the contractual theory to prevent such exploitative practices.

The chaotic dynamics are non-standard flots, but can be represented in finite phase spaces.

Such "Sculptures of Chaos" are presented and simulated in an e-paper co-authored with Jos Leys at the site "Images des Mathématiques", affiliated to the CNRS, France: 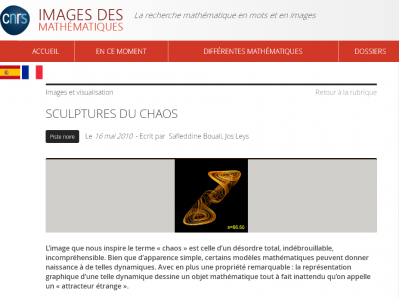 It includes for example such two elegant figures : 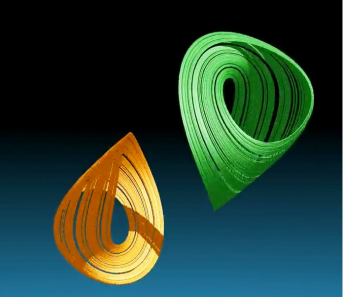 Fig.2. For a particular parameters, the system leads to two attractors in separate basins from close initial conditions..

Here, a YouTube animation by the wizard of Mathematical Imagery Jos Leys :

( Redirection to the App. by clicking on the screenshot) 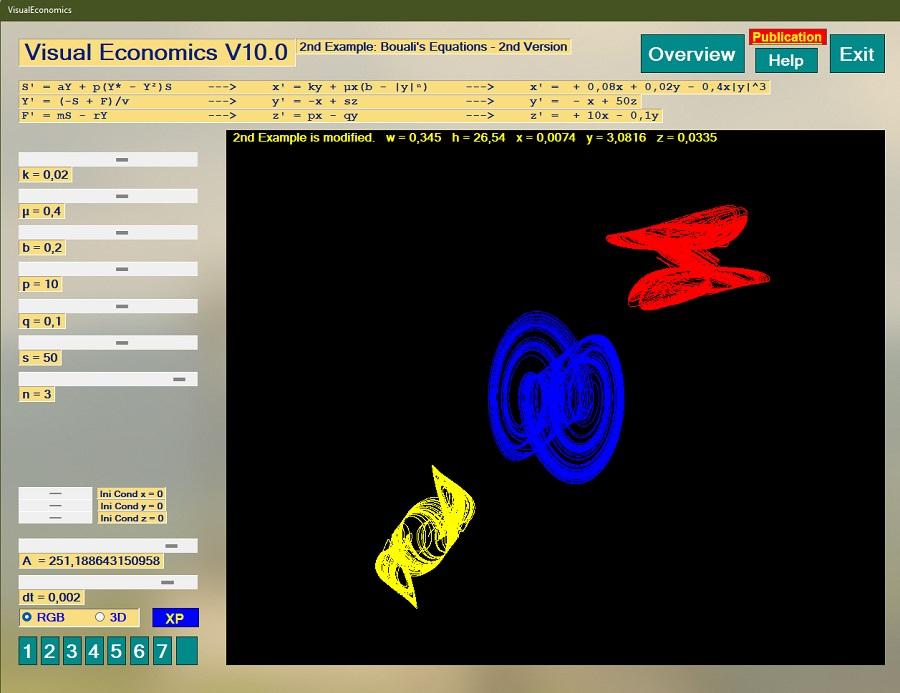 Modifying parameters, several shapes of the strange attractors could be created !

Simulation and Animation by the Mathematical Imagery pathfinder Jos Leys :

A 3D Strange Attractor with a Distinctive Silhouette. The Butterfly Effect Revisited

A Mathematical Imagery and Simulation Designed by the Maths & Arts creator Jos Leys : 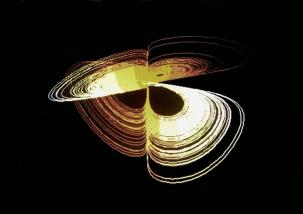 A beautiful simulation of the Attractor 4 "solo" made by Jos Leys :

Simultaneous simulations of the two attractors in their respective basins by Jos Leys :

A new intentionally constructed model exhibiting double, four- or even six-wing strange attractor is investigated. We point out that under the influence of the scalar parameters, such versatile chaotic attractors are obtained.

The model presentation with simulations of the double-, four- and six-wing attractor in the following ( beautiful !) film made by Jos Leys:

It is expected that such system converges asymptotically to an unique strange attractor for any initial conditions. However, the following portraits projected to the (x, y, z) phase space are related to small changes of these conditions: 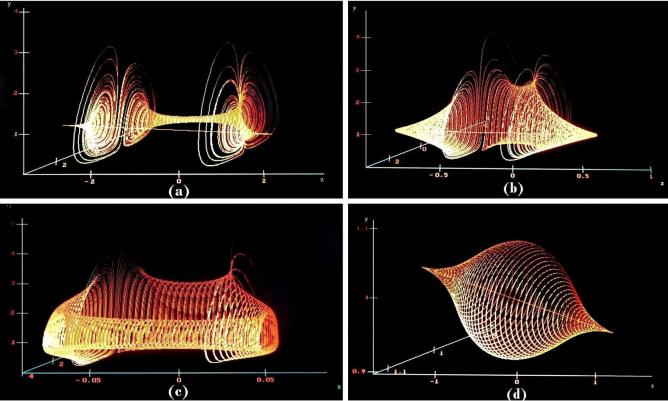 Such sensitive dependence on initial conditions is illustrated in this simulation, Bouali attractor 4D - Morphogenesis, by Jos Leys:

The Science of Process mixing order and disorder can be extended to the space of dimension four. Here too there are strange attractors !

representation of the 4D space is unrealizable

An artistic animation by the maths & Arts pathfinder Jos Leys  :

3D projections of the phase portrait of the Attractor

The article "Hidden Structure and Complex Dynamics of Hyperchaotic Attractors",

analyzing the two hyperchaotic systems is published in:

Cover images, figures and graphics of the paper are kindly provided by Jos Leys.

A pre-print on strange attractors ...which should not exist !

co-authored with Marcus A. Rezende, and Jos Leys

In this paper we present a simple method to discover singular silhouettes having chaos attributes. The method rearranges in an arbitrary way the coordinate series of known strange attractors.
Reconnecting arbitrarily such series, the method leads to a novel sequence of stretch & fold, the fundamental kinematics of the attractor strangeness. The intersection of Mathematics & Arts being the main focus of this research, strange attractors that should not exist were generated displaying a facet of creative processes in visual arts. The portraits, sometimes elegant among the dozens that the
application allows to build, unveil false strange attractors. By performing harmonious or disturbedcarves, our application of generative art can create silhouettes not seen before. 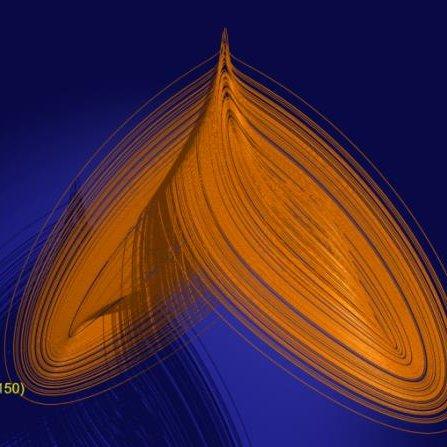 Even though false attractors shouldn't exist, Jos Leys simulate them !

In a wide range of nonlinear phenomena, dynamical behavior can be suitably formulated with differential equations.

We explored also theoretical fields far from our Economics Education. 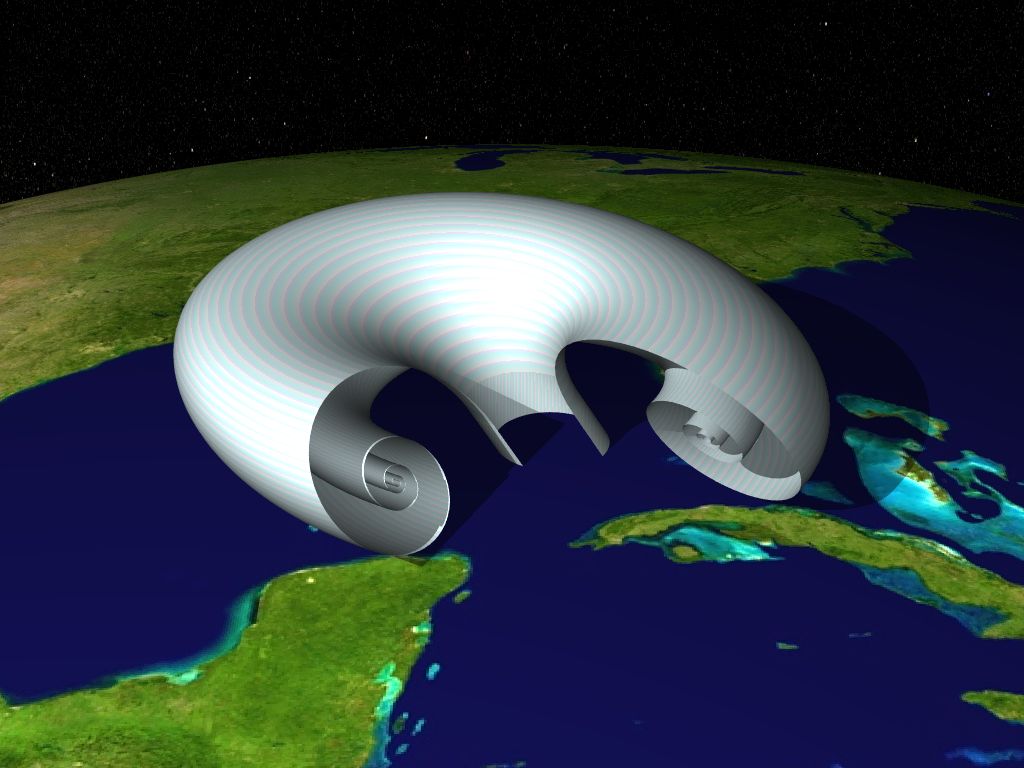 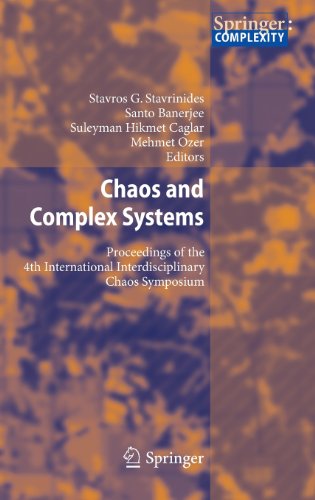 We studied the competition of the mobile network operators in the Tunisian market of telecommunications: 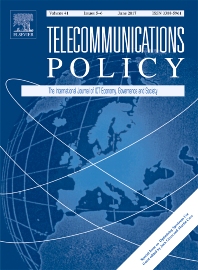 Since 2006, the Tunisian National Regulatory Authority has been imposing multiannual mobile-to-mobile termination rates, first on the duopoly of Tunisie Télécom and Tunisiana, and then on all three providers once Orange Tunisie entered the market in 2010.

This research studies the interplay between interconnection rates for mobile call termination and the retail price competition for prepaid SIM cards, predominantly chosen by Tunisian consumers. We show that the duopoly was practicing “price alignment” for off-net calls, and that subsequently, the third provider entering the market sparked a decisive initial price drop associated with the non-reciprocal rate it enjoyed.

However, the price war, which benefited consumers, only occurred when the Regulatory Body eliminated differential tariffs between on and off-net calls in the retail market. It follows that, everything else being equal, an interconnection rate drop alone will not lead to a decrease in retail prices. 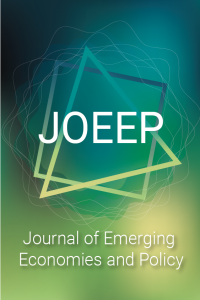 The Tunisian telecommunication market experienced intense price-cuts of the mobile-to-mobile voice phone services throughout the 2011-2015 period. This paper shows that the three major providers, Tunisie Télécom, Ooredoo and Orange, have replicated the price-cuts as in the Tit-For-Tat game or over-reacted despite the hurt of their revenues. This paper investigates whether price dynamics is a simple strategy for gaining market share or a “price war”, as described in the economic literature. This paper constructs the demand curves for each provider based on price-elasticity, average revenue per user and price series, and then we analyze their lags. The pure pricing strategy is discussed as it coincided with the fast growth of data traffics and the decrease of the gross national disposable income per capita.

New ! Covid-19 Impact on Vertical Relations
A Research Paper on Opportunistic Conduct between Firms, and Unleashed by the Covid-19 Pandemic: 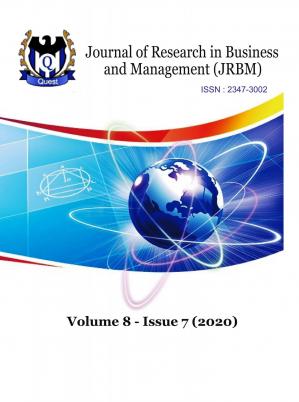 The visit counter was previously reset when it exceeded 8,000.